Freedom to Find​ Food: A Quest for Breakfast

It’s difficult to convey how invigorating and freeing it is to get a bike here in Phnom Penh.  Freedom of movement.  No negotiations with a tuk tuk driver.  No more nervous riding as a modtodop (motor scooter “taxi”) weaves through traffic, but finally sitting in the driver’s seat.  The first thing I do with this freedom?  Eat.  I ride around my neighborhood and check out lots of food stands, stalls, alleys, and outdoor restaurants.  My favorite is breakfast food.

Yes, there are plenty of fancy foreigner joints, but the ones I’m talking about here are the Khmer-style food stops. 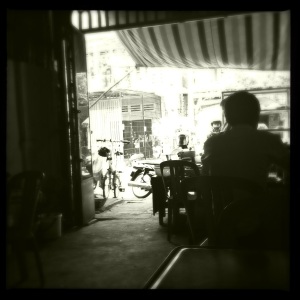 DAY 2 – View from inside the “restaurant”

DAY 1: After I finally got a bike and could ride to work, I decided to seek out a breakfast spot.  The first day I stopped at a very small operation in which most people seemed to be getting food to go.  I saw a little table with just one woman and one chair free.  I asked what they had មានអីខ្លះ? (mien ey klas?) and was told it was បបរត្រី​ bah bah drey (fish-based rice porridge).  Sounded good to me so I wiped the chair and my spot at the table with the tissues available (as you do) and sat down.  I asked if they had coffee and the answer was (sadly) no.  Having sat down, I noticed that there were a whole line of people (4 or 5) sitting at a long table inside this tiny alley behind the “kitchen” (pots sitting on charcoal burning stoves).  The woman sitting next to me asked the owner (and cook) if she had seem me before.  No, never.  I interjected in Khmer that I only just moved nearby.  When I received the bowl of porridge, I took a spoon from the container in which spoons were kept.  The container is usually full of water as boiling water is used to sanitize the utensils.  You take the spoon and wipe it dry with one of the tissues on the table.  The tissues either go directly on the ground to be swept away later or if it’s a fancy place they provide a tiny trash can for each table.  I asked for advice on how to spice up the concoction, pointing to two different kinds of pepper sauces in jars on the table and asking which one is better.  It was a yummy cheap meal (I forget now, 50 cents maybe) but I had to stop for a coffee at another shop on the way to work.

DAY 2: I rode a bit further down the street and saw a “restaurant” well hidden but the sight of women grilling of pork on the charcoal stove right at the street caught my eye.  I asked if they had coffee and what else they had and sure enough they had had both coffee and my favorite បាយសេាចជ្រូ pork on rice.  I probably wrote about this meal during my other visits to Cambodia because it’s quite tasty.  What you get: a plate of rice with grilled sweet slices of pork, sometimes a little spicy sauce and green onion on it.  It comes with a soup that I never eat and the best part is a pickled garnish that you put on the rice.  This sweet and sour yumminess reminds me of pickled ginger at sushi restaurants.  It’s called ជ្រក់​and it’s amazing.  There’s usually pickled (or at least vinegary) carrot, cucumber and maybe ginger.  I usually need two little side dishes of it to make it through a plate of rice with pork.  This meal with the glass of iced coffee (what I always called vietnamese iced coffee in the States) is perfect.  It was pricier than usual – $2.15 for everything.  The place wasn’t packed but there were four distinct tables with young professionals I’d guess (office workers?), sitting eating their morning meals. 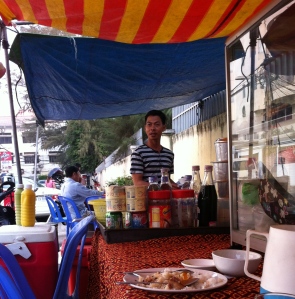 DAY 3: I couldn’t find that hidden, fancy spot so I rode some more.  I stopped at a place that sold baotze (chinese-style buns).  The cook told me these had duck egg inside.  She was also making sandwiches (very similar to vietnamese-style sandwiches) which wouldn’t work for me this morning.  I kept riding, looking for breakfast stands and saw a street side operation–a pretty big one.  They had three big tables or sets of tables.  The food preparation occurred at the middle set of tables and was likely a family working in a production line.  One man made the drinks.  A woman next to him was cooking.  Another woman prepared plates and another added the extras (like the soup and pickled veggies), and finally the youngest woman, the one closest to me, was running around taking orders and shouting them out to the others.  They had a display case with various dishes so I had to ask if they had my favorite.  Yes, they did.  And coffee?  Yes.  I asked where I should sit and she pointed to the spot right in front of her.  It was a bad spot for conversation.  No one else was at seated at the middle section, but a perfect place from which to view the operation.  I got the plate of rice with pork pretty quick, turned down the soup, and had to ask for ​ជ្រក់ .  The coffee required the woman second from the end, who was wearing a wide brimmed hat to shout out the order over and over កាហ្វទឹកដោះគោទឹកកក cafvway (dek) dah go de gak, cafvway (dek) dah go de gak.  “Hold on a minute!,” the man finally retorted.  I got it eventually.  The other tables were mostly full of men.  Older men in buttoned-down shirts sat at the group of tables to my left.  To my right looked like university-aged students in their white shirts and black pants.  There was a mother and child at the furthest table away but I couldn’t really see them.  A young woman came and sat a seat away.  She finished her food in a few minutes and left.

After enjoying my meal and the people-watching, I paid my money $2.15 and rode away on my little freedom-giving bicycle.