Today is ថ្ងៃសីល tngai sel, Precept Day, when Buddhist followers go to the wat to receive and reaffirm the five precepts.  Hence as part of my participant-observation, I was up at 4:00 am and at 4:30 biked over to the វត្ត wat.  I walked downstairs and the guard was still sleeping, everything securely locked.  I woke him to let me out and he asked if I was going to exercise?  No, I’m going to the wat, I explained.  It was still dark.  As I walked out of the garage, I looked around.  The street was the quietest I have ever seen it, not a soul out.

Most streets, including my own, were well lit with street lights.  As I rode my bike toward the wat, I came across a person or two walking–doing their morning exercise.  Some stray dogs were up, too.  I avoided a pack of dogs down one street, opting to go a different way.

As I biked north, I saw more and more people.  There was a group of about 5 people doing their walking and many more doing their exercise on their own.

I passed by the Toul Sleng Museum on the left, which was eerie to pass in the darkness.

I rode by a tuk tuk parked on the right side of a the rode, the tarp-like shades/walls drawn, and the driver likely still sleeping inside.  Here and there I would see a woman walking in a white shirt and  សំពត់ sombot (long wrap around skirt) with her container of prepared food and rice to offer to the monks at the wat.  One family had a fire burning, ready to start cooking rice, probably as a part of a street food shop.

I also passed a fancy Chinese restaurant with covered tables and wooden chairs, lights on inside, where people had already eaten and were leaving.  In this area there were more and more places where food was already being served.

I finally arrived at the wat following others on ម៉ូតូឌុប modto​dops, motocycle (or scooter) taxis.  I saw what many people were doing before sunrise–getting ready to take the precepts and give offerings to the សង្ឃ sangha.  As you can see, 90% were women.  There were ដូនជី donji, or Buddhist “nuns” and old “grandmothers” and middle aged women.  There were some–very few–men and kids there, too. 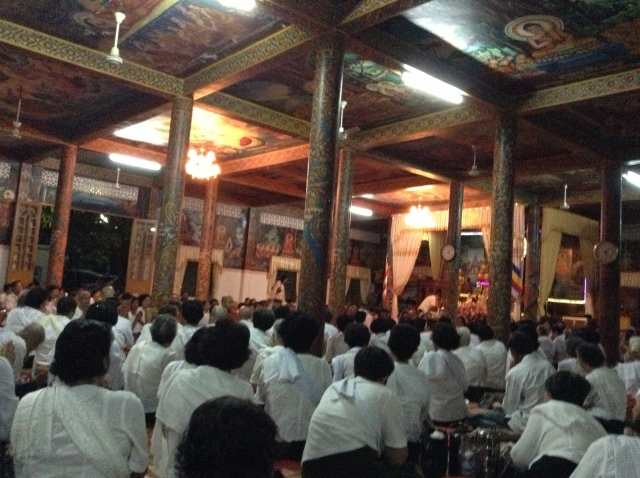 The សាលាឆាន់ sala chan, the large eating hall, was filled with well over 100 people.  The room featured a large Buddha at the front and the walls, round columns, and ceiling were brightly painted.  On each bay was one scene from the Buddha’s life.  Outside the room was a patio with candles that people had offered and incense that they were offering.  People filled this outside area as well.  At about 5:05 the monks processed in and everyone rose and with their hands together, showing respect.

The monks sat down near the center of the room (away from the Buddha) and the monks and ពុទ្ធបរិស័ទ buta barisat, Buddhist followers, chanted.  Then one monk introduced the monk who would be preaching.  The sermon began, and focused on ស្ងប់ which means quiet, calm, silent, motionless, tranquil.  Before the sermon was finished and the precepts were recited, at about 5:30 I could see the daylight through the open door.  The sun was up. 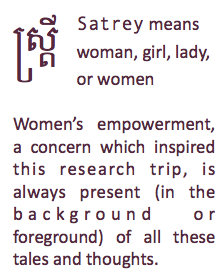