Want to get your nails done?  Come to Cambodia.  You’ve got lots of options here.  Yes, I’ve gone to the fancy spa and paid a whopping $15, went to a Christian NGO “business” (helping women by employing them to work painting nails), and even had a terrible mani-pedi at what seemed to me to be a front for some other sorts of activities (a brothel, perhaps?  maybe not).

But I finally had my first market manicure–or pedicure actually.  I’ve always wanted to try it but haven’t seen an opening for a foreigner to jump in there.  But, one day walking through the market with naked toenails, I noticed a glass cabinet with some high quality nail polish inside.  I stopped and peeked inside.  I scoped out the little stall with girls sitting on tiny stools and one well-to-do-looking Khmer woman getting her nails done.  The old women with painted on eyebrows and thinning hair that had been dyed and was a shade of brown started talking to me.  I hesitated, not immediately responding and they thought I didn’t speak Khmer.  The other customer said she doesn’t know (probably how to speak Khmer).  I said, I know how to.  I asked how much for feet.  She said 4000.  Basically, a dollar.  That sounded good to me. 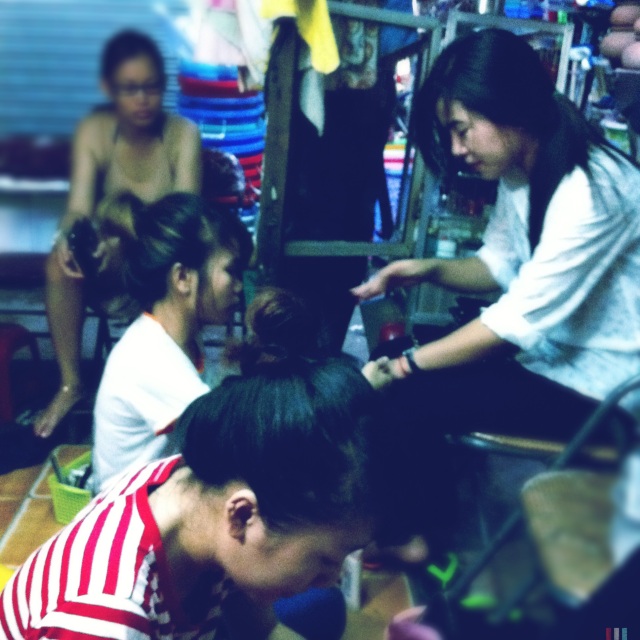 I chose my polish, a deep red, and had a seat.  They prepared a small metal bowl of water (cold water) and had me soak both feet first.  There were four girls–maybe in their early twenties who were the employees.  The other woman was getting her fingernails done.  They were painting some designs in white using a tiny brush and acrylic paint straight from the tube.  It was very pretty.  I commented on how pretty it was.  She was a middle-aged woman, a bit chubby which meant she wasn’t having a hard time getting plenty of food (a sign of affluence) with make-up and hairsprayed hair, her hair in front pulled back but fluffed in front like my friends and I used to wear ours in the 90s.  There was a fan and the old woman was boiling water (I guess) which caused some waves of heat from time to time.  I was trying to figure out who owned the place and how this was working.  A man came and “cleaned out” the money from the cabinet–at least that’s what it looked like.  I’m not sure if he was related or an owner or if he was just collecting rent for the stall in the market.  The old woman set up a hammock and sat on that, hovering just inches off the ground.

After the woman next to me had her nails sealed with a clear coat, they turned the fan off.  I asked if the wind was all gone.  They asked if I was hot?  Yes. (Absolutely!)  They turned it back on which was great.  I still felt the sweat dripping down my back and running below my waist line but my front was pretty cool and comfortable, considering.

A foreigner woman walked by and the old woman said, “your friend.”  “Don’t know her,” I replied.  They were tickled that I responded in Khmer.  Another thin young Khmer woman came over to get her nails done.  She also seemed to fit comfortably within middle class by the looks of it.  The girls at this shop knew her, perhaps a regular.

The pedicure itself was pretty standard and good quality.  Cuticle cutters did wonders to make my feet look like they were not in sandals every day.  Filing.  Buffing. Base coat.  Two colors coats and a top coat.  Then my newly painted toes got the fan.  I sat there for a bit, waiting for them to dry some and looking at the makeshift space.  The “ceiling” was plastic something and the cords for the lights and other things were taped on with clear packing tape.  The market “salon” really is part of a different world.  After a few minutes me and my new fancy nails continued our market shopping. 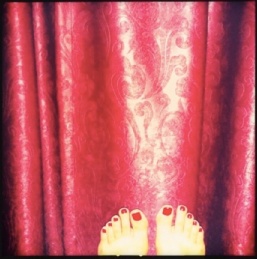